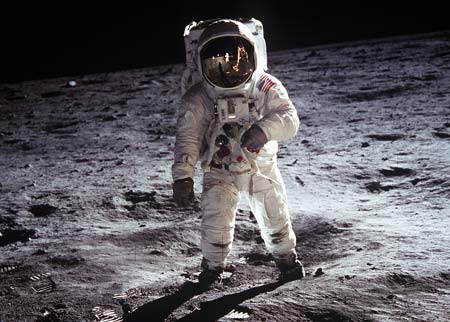 I don’t have much to add to the hooplah over the 40th anniversary of the Apollo 11 moon landing, but I figured it was worth at least a mention.

I was just 4 years old when Neil Armstrong hopped down onto the lunar surface, so when it comes to personal memories of that “one giant leap for mankind” …well, not much. here.  But I do remember the excitement of the era, and indeed astronauts in general were my first real-life heroes.

I remember watching numerous launches, possibly including Apollo 11 but certainly the subsequent moon missions and Apollo-Soyuz. I remember climbing onto the sofa with my little brother, both of us in our footed pajamas, with our backs on the seat cushions and our legs up against the back of the sofa, staging our own countdown to lift-off. I remember my G.I. Joe with his shiny foil spacesuit and space capsule, and the accompanying 45rpm record of John Glenn’s transmissions from Friendship 7. I remember the lady across the street who gave us patches from various NASA missions (her son had collected them, but now he was off at college, or the Army or something. Wonder how he felt about it when he got back home?).

And you know what else I remember? The certainty that the Moon was just the beginning. That soon we’d be on Mars and after that, who knows? That we’d have a moonbase like on that UFO show, or Space: 1999, and that working there would be one of my career options once I grew up. Little did we know.

In fact, if you asked me what’s the most amazing thing about the future, now that we’re living in it, I wouldn’t cite the internet, or GPS in every car, or iPods or any of that stuff. The most amazing thing is what we haven’t done, and where we haven’t gone. It’s amazing that we would get so far so fast with manned spaceflight and then hang it up. Of course now we may be going back to the Moon, and for the same reason as last time; to beat the other guys there (China is aiming for 2020).

Anyway, it was pretty cool growing up in a time where something as wonderful as the moonshots could happen; looking up at the Moon and thinking, “Men have been there,” or even, “There are guys up there right now, looking back down at us.” Sometimes one of the boys will point out the Moon — it especially fascinates them to see it in the daytime — and I’ll catch myself saying, “You know, men have been to the Moon.” I’m never sure how they take that, whether it’s “so what?” or “is this another of Daddy’s jokes?” or if they have any concept of what was involved in getting there, or why it mattered. On some level, maybe it didn’t matter much, considering what it didn’t lead to. But for my generation, for those of us who grew up with the lunar landings as a fact of life from our earliest years, it was a pretty empowering thing. Kids, I think, live on the power of possibility, the infinite promise of tomorrow, the faith that what they imagine today they can someday make real. That’s what the Apollo missions did for us. I’d like my kids to have that, too.

This site uses Akismet to reduce spam. Learn how your comment data is processed. 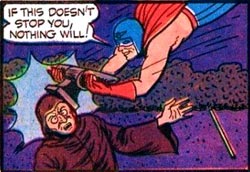 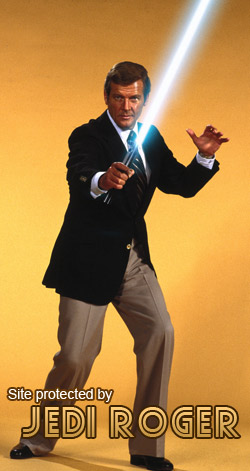